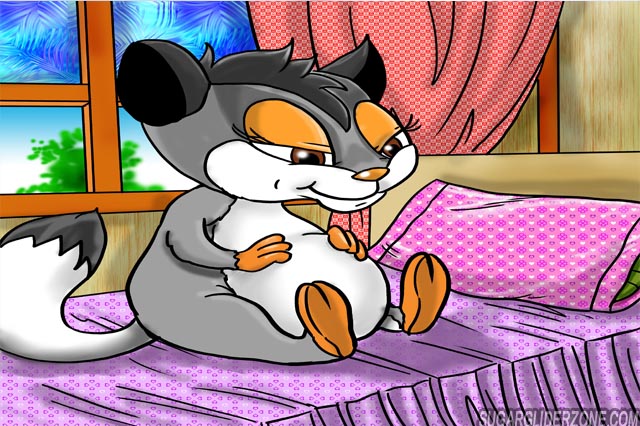 Sugar gliders are tiny marsupials that have a silver blue-gray fur and large eyes which makes them look incredibly adorable. These small little creatures belong to the same family as kangaroos, Tasmanian devils, and wombats.

Your female sugar glider can be pregnant if she’s been in contact with a male and hasn’t been neutered.

Just like with kangaroos, sugar gliders birth their young when they’re as small as a grain of rice and then, nurture them in their pouch until they’re big enough.

In this article, I’ll answer the question, “How long are sugar gliders pregnant for?” to the best of my ability.

So, without further ado, let’s begin!

How to Know that Your Sugar Glider is Pregnant?

It can be tough for humans to determine whether or not their female sugar glider is pregnant or not. 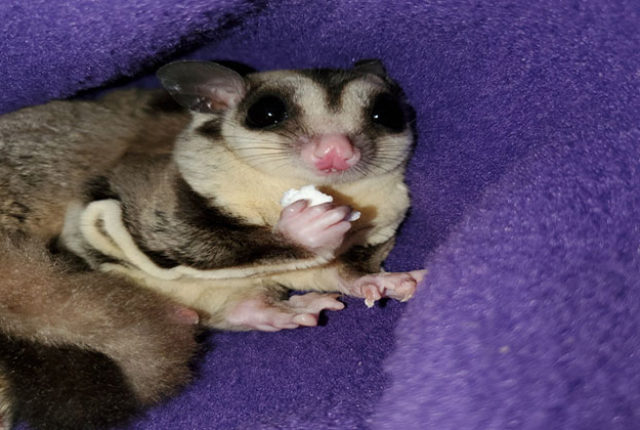 In this section of the article, I will go through the symptoms of pregnancy in sugar gliders.

The female sugar glider will have an increased appetite since pregnancy and lactation takes a toll of their body. ​

this time, their needs for calcium will also increase.

The pouch of the sugar glider will swell up to accommodate the little ones. You’ll be able to notice small bumps six weeks after the birth.

The Age of Your Sugar Glider

If your female sugar glider is at least eight months old, she’ll be able to get pregnant and carry babies.

How Long Are Sugar Gliders Pregnant For?

Since sugar gliders belong to the marsupial family, their pregnancies are short as the babies do a lot of growing in their mother’s pouch. 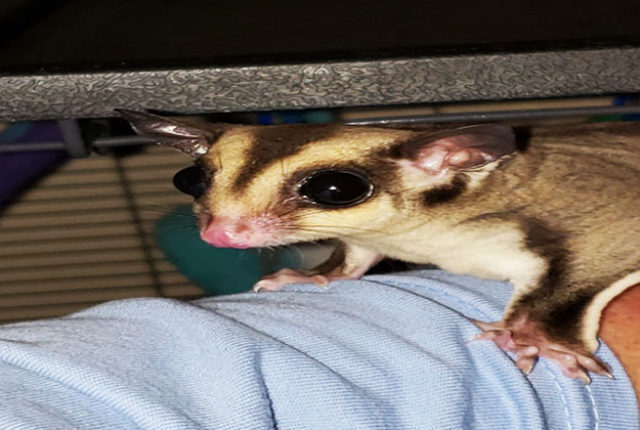 Sugar gliders are pregnant for about 16 days.

The Period of Gestation

As I just mentioned above, sugar gliders have a short gestation period of 15 to 17 days.

All the mother needs during this time are more food and water, and that’ll be all!

Since the gestation period is so short, it is nearly impossible to see the signs of pregnancy earlier on.

However, the pregnant female may have some changes in her behavior such as being unfriendly and restless.

For a healthy pregnancy, it is important to reduce her stress level and move her to a peaceful location.

The Birth of and the Pouch

Sugar glider babies are really small in size and underdeveloped. 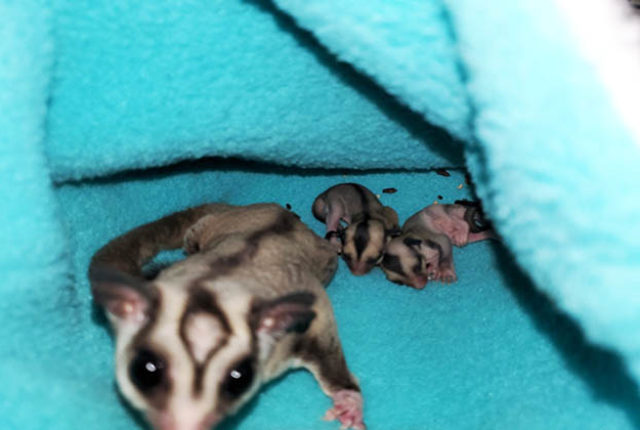 They have no fur to cover their pink skin and have their eyes shut as they are still developing.

The ears of the babies look like numbs on the side of their head as they’re fused shut.

Before giving birth, the mother licks a trail of saliva for her baby from her uterus to the pouch which the baby instinctively follows.

It takes about 5 minutes for the baby to get to the pouch. However, if it loses its grip, the mother is unable to assist, and the result is fatal.

If the baby reaches the pouch safely, it attaches itself to one of the four nipples.

However, the baby doesn’t have a jaw developed enough to suckle the milk. So, in this case, the nipple swells in the baby’s mouth, and the child gets stuck to it.

In the Safety of the Pouch

Two to three weeks after the birth, you will be able to see a small swelling in the pouch. It is not a good idea to disturb the mother.

However, you can gently palpate the mother’s abdomen to get an idea of the number of babies in there. 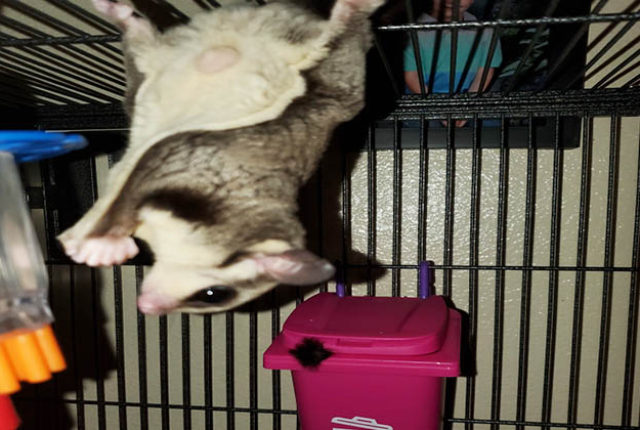 Six weeks after the migration to the pouch, the baby’s jaw muscles develop entirely and the child can now disengage from the nipple and can suckle as well.

The mother’s abdomen will appear bigger at this stage.

At about eight weeks you’ll be able to see the joey’s limbs or tail peeking out.

At the age of ten weeks, the joeys will be able to eat solid food and will leave the mother’s pouch for brief meals.

However, their main source of nutrition will still be milk.

Four months after the birth, joeys leave the mother’s pouch. At this age, they weigh less than an ounce.

For most joey's, permanently leaving the mother’s pouch comes as a harsh truth they try to avoid until they’re too big to fit in it. 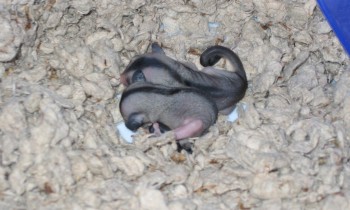 They start by climbing tail first, but leave their head in for a long time---sometimes even two days!

The baby’s body is covered with a fur shorter and lighter than that of adult sugar gliders.

Their eyes take about ten days to open after they leave the mother’s pouch and they ride on their mother’s (or even father’s) back until they reach the age of five months.

By the time they have been out of their mother’s pouch for six weeks, they are fully weaned and eat solid food on their own.

At this stage, they are ready to have a life of their own.

Once the baby sugar gliders are weaned, you can take them away from their parents. 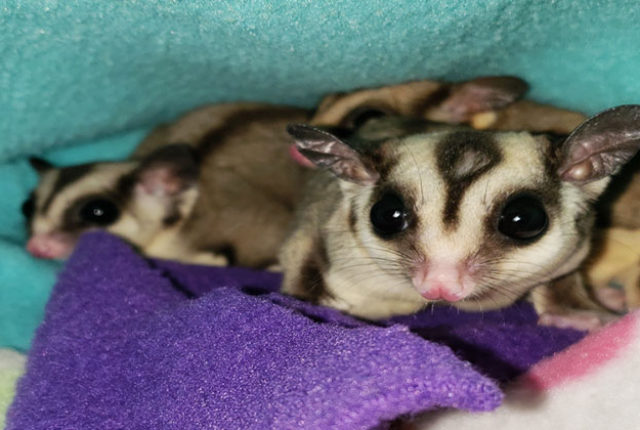 If your sugar glider gave birth to twin males, you should consider getting them neutered as two non neutered male sugar gliders can be aggressive with each other and are known to fight to death---even if there isn’t any female sugar glider involved!

The earlier you neuter the males, the sweeter a personality they’ll have.

You should neuter the male at the age of 8-16 weeks for them to be affectionate, fun-loving, and friendly in their adult life.

Final Words: How Long Are Sugar Gliders Pregnant For?

Sugar gliders are pregnant for 15-17 weeks on an average. 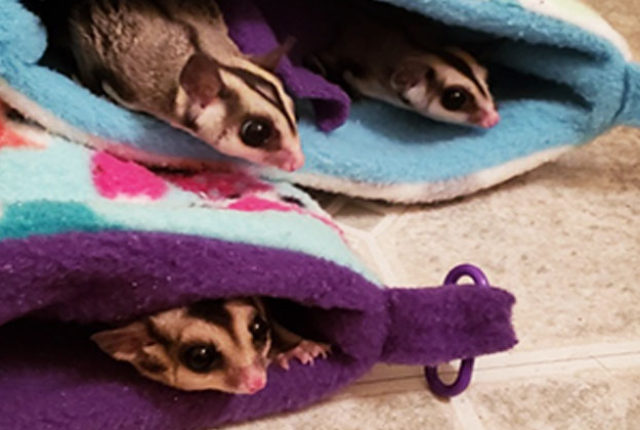 The newborn baby has to find his way to the mother’s pouch and attach himself to one of the four nipples for the several weeks to come.

The newborn marsupial is as small as a grain of rice and has his eyes and ears fused shut.

It is in their mother’s pouch that they develop considerably.

SugarGliderZone.com is a participant in the Amazon Services LLC Associates Program, an affiliate advertising program designed to provide a means for sites to earn advertising fees by advertising and linking to Amazon.com