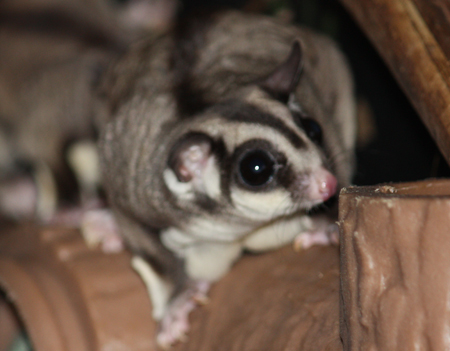 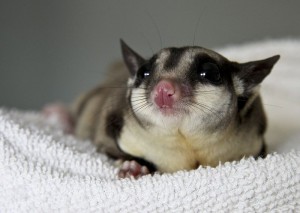 What is a Sugar Glider? What is a Sugar Bear? Sugar Gliders sometimes called Sugar Bears are close relatives of the kangaroo and get their name in part because they have a flap of skin under each arm that allows them to ‘glide’ through the air. These tiny marsupials are originally from the rain forests of Indonesia and Australia, but have been domesticated over the last two decades and have become common house pets across the world.

Sweet Name
Why are they called Sugar Gliders? It’s because they love to eat any food that is sweet and their original rain forest home provided them with an abundance of sweet fruits and vegetables to live on. There natural diet is where the first part of their name comes from and the second part comes from their gliding ability. The small marsupial has a membrane that reaches from the wrist to their ankle, much like that of a flying squirrel, which allows them to jump from one location and glide to another location. The sugar glider stretches out all four legs during the jump, which in turn stretches out the membrane and the air current glides the airborne animal to a safe landing.

Four Hands
Sugar gliders have four hands and no feet. The hands have opposing thumbs just like our hands which allows them to pick up and hold things. The tiny marsupials hold their food and eat much like we do. Their intelligence and gripping ability make them very entertaining to watch both at meal time and play time.

Not a Rodent
Although the sugar glider has the same membrane and gliding ability as a flying squirrel, it’s not a rodent like the squirrel is. The sugar glider is closely related to the koala bear and kangaroo and is a member of the Petauridae family.

No Chewing
Another trait that sets them apart from rodents is their non-destructive nature. All domesticated (and non-domesticated) rodents, such as rats, hamsters, gerbils and squirrels, have a natural need to chew on something constantly. The constant chewing of a rodent stems from their need to keep their ever-growing teeth ground down and in check. Sugar gliders do not have this issue. Once a sugar glider’s teeth reach maturity, they remain that same size so the marsupial does not have the need to chew constantly and be destructive.

Nocturnal
In their natural habitat, sugar gliders are up all night and sleep all day, but in your home it’s a different schedule. These marsupials are easily trained to a sleep/wake cycle of your choosing. Train them to go to bed at a certain time each night and awaken at a certain time each morning. If you are gone from them during the daytime, consider allowing them to remain nocturnal so they will sleep during the day and not be affected by your daytime absence. Sugar gliders are virtually silent and can play all night without disrupting your sleep when provided will soft, noise-less types to play with in their cage.

Odor-Free
Ferrets, hamsters, gerbils and other similar rodent-type pets have distinctive and often unpleasant odors, sugar gliders do not. When fed a proper diet a sugar glider has no distinguishable odor and nobody’s nose will detect the presence of a sugar glider in your home or pocket. 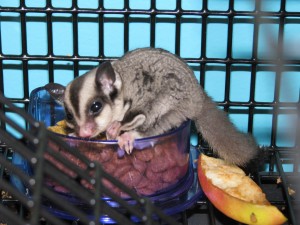 A proper diet is very basic and inexpensive, consisting of a slice of fresh fruit and small amount of specially formulated pelleted food each day. The specially formulated food provides the protein that the marsupial needs without causing it to produce an off-putting odor. In its normal rain forest habitat, a sugar glider would get its protein from eggs and insects, however, if animal protein is fed to a domesticated sugar glider, it will develop an unmistakable musky scent.

Potty Habits
Sugar gliders can’t be litter box trained, but they have predictable potty habits that make the elimination issue easy to deal with. From birth, sugar gliders won’t ‘go’ where they sleep, unless you make them wait too long and they have an accident. They need to eliminate upon waking and every 3-4 hours thereafter. Simply remove them from your pocket (shoulder, head, etc.) and place them on a paper towel or hold them over a sink and they will take care of business.

Boy or Girl?
With any domesticated pets, like cats and dogs, there are distinct personality differences between the males and females. Not so with sugar gliders. Both boys and girls have equally sweet dispositions with their own unique personality. In the wild, the marsupial lives in large colonies consisting of males and females and will live happily in a cage with members of the same or opposite sex. Sugar gliders are happy to live alone with you as their close companion, but as with any animal they are happiest when provided with a constant playmate that looks and acts much like they do.